Part of the move-in process includes a fresh start by repainting the entire interior. I’m talking walls, trim, windows, doors and ceilings. It’s no minor task designing our new home from scratch. Every day presents a new decision, but we’ll start first with a fresh coat!

Sarah and I are having an email dialog about the perils of choosing paint colors. How lucky am I to have her expert consultation at my fingertips?

It makes me anxious to hear her say she needs to know more about the vibe we are after in order to help me suss out the differences between whites! But this post is my attempt in communicating our desires.

To start, there is nothing like experiencing the room throughout the day, and getting a feeling for the light as it passes from east to west.

Here is a look at the vacant living room. 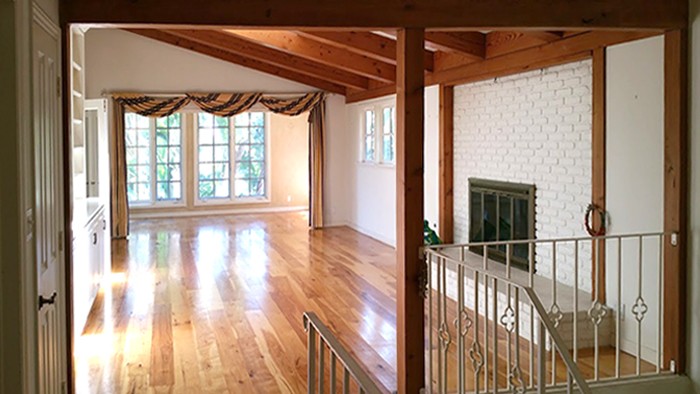 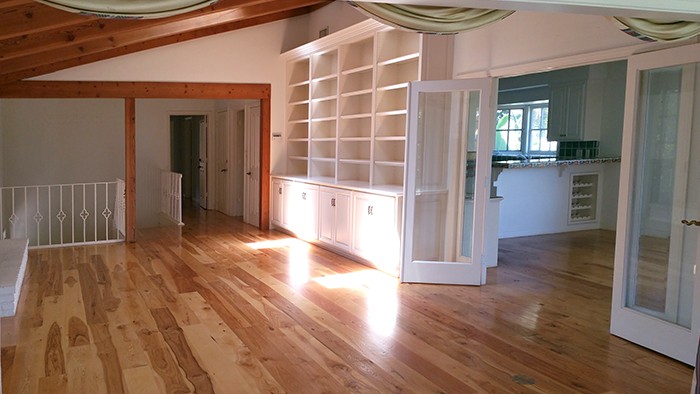 We have already removed the drapes and the brass fire screen. The large built-in will be torn out next week, and despite falling rather in love with it at first sight, those interior french doors are going away too. Our whole M.O. up in here, is to simplify and modernize.

I have pondered removing almost all of the trim detail from door jams to window casings, but I don’t believe I can readily get the dude on board with that. It seems like it’s a worthy consideration though.

The walls are already white. Part of me thinks it is kind of crazy to come in and repaint it all a shade or two brighter (especially with the associated price tag,) but we decided that while she’s vacant, we want the fresh coat either way, and the current white is a creamy yellow that reads super warm, where we are looking for that crisp cool bright white we’ve all grown to love. We love the rustic wood beams, and will be leaving them as is.

Are you the kind of person that belabors the decision making process? Mostly, I am not. I’m usually in and out. I don’t really like to test or sample, I hate trying clothes on, and I don’t need a yelp review to decide where to eat. Let’s just go, it’ll be fine. I’m willing to live with my often less than perfect results.

Except for when it comes to white paint, apparently. 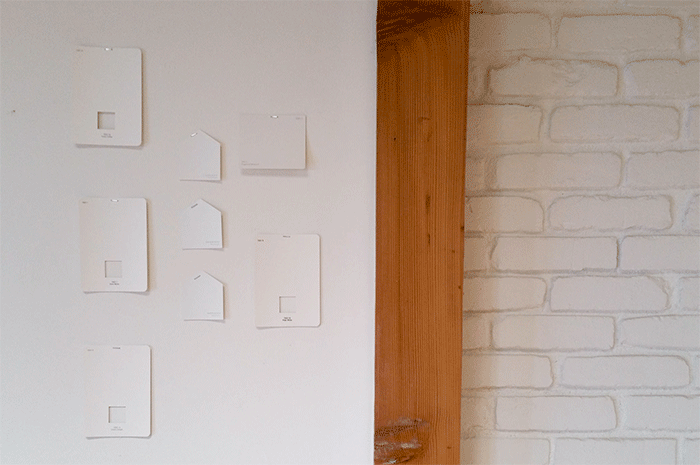 We are narrowing down some choices that we will next paint in large swatches on the wall. The room sees an array of hues with the passing of the California sunshine overhead. The dead center chip is called Oxford White and is seeing high favor from both me and Heffe throughout the days and nights. That top left is “swiss coffee,” I believe it’s the closest to what is already happening on the walls throughout the home.  We are also partial to the top right chip, Dogwood Blossom, but it definitely reads less crisp white and more greige. I’m not sure we want the hue.

The ALL WHITE EVERYTHING phase that is going on in decor at the moment is the move of the decade. It’s certainly rampant in SoCal design, borrowed from Scandinavian design and quite prolific in the French interiors that I have been digging into since our vacation to Paris last week, where we stayed in this incredible flat. 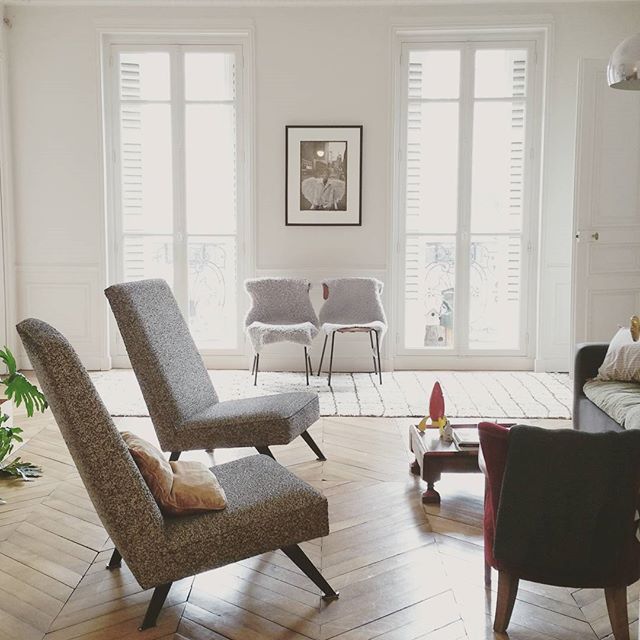 From the mix of those influences, there is a vibe that we’re after, and I hope that we can achieve it. A crisp white backdrop is part of that look, but rustic woods and black accents play an important role as well.

Here are a few more inspiration images that I have gathered to help us set the tone. 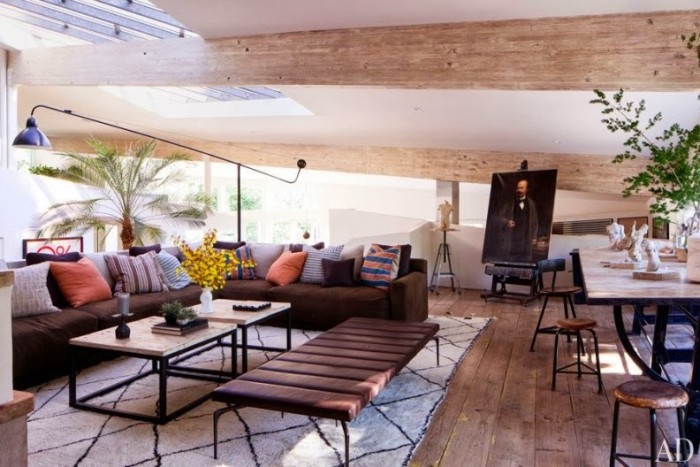 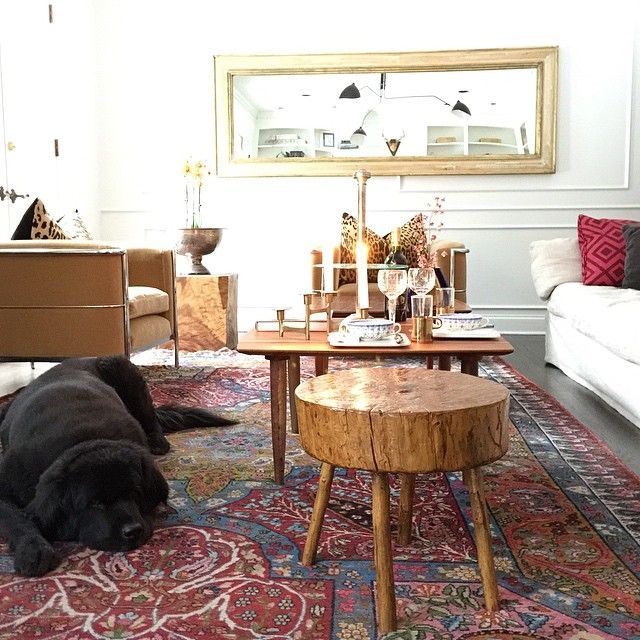 Important first and foremost because of Newfie, but of additional note this room features Serge Mouille lighting, warm rustic textures and use of pattern! Sarah, you actually linked to this same room in your Serge roundup!
I found the Newfie pic on Instagram 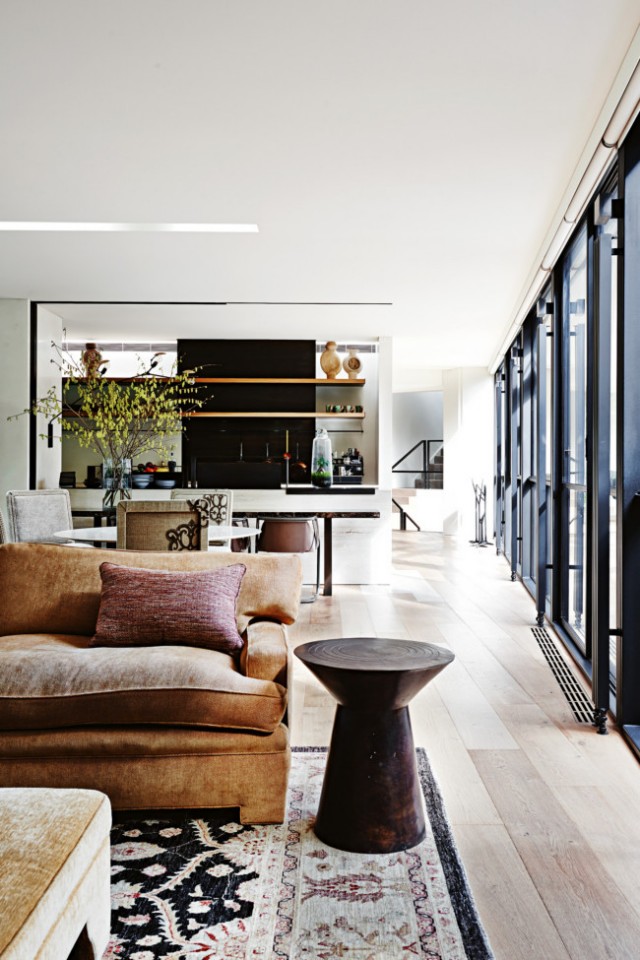 The Bridge House is notable for its mix of whites, woods and black accents, which is a trend that you will see in the following photos as well. Let’s call this the vibe that we’re after. It has a sense of a rustic, worn, lived-in modernism. 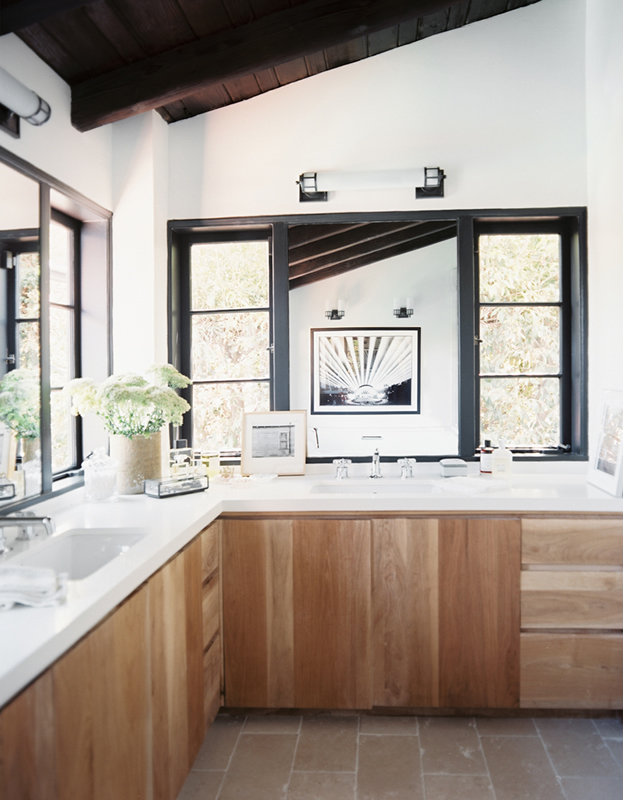 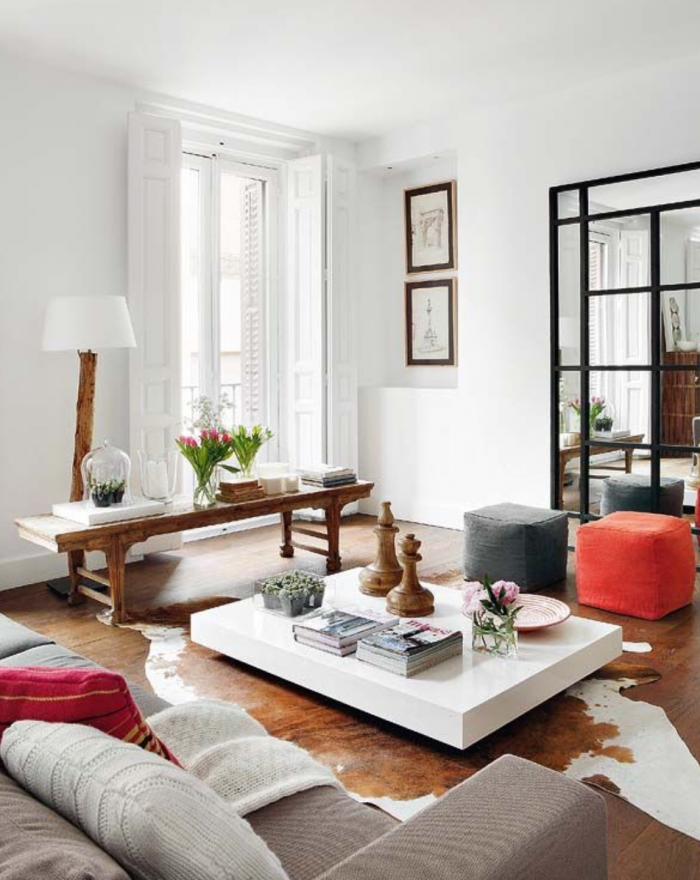 The large black warehouse frame look is achieved with a mirror. I’m totally into that trick, since I probably wouldn’t be allowed to go so bold & paint the trim on our french windows in black. Could be a great way to try out the black grid accent without the major commitment.

The kids rooms will be painted the colors of their choosing. We’re tossing around some ideas to toss some color on the hallway doors and the ceiling in the sunroom is going to be blue. But any other color choices will come about later, once the all white walls living commences.  I hope we get it right.

See more visual notes on the Shaniqua pinterest board.
We’ll see what comes together, but for now I’ve done my best to give Sarah a glimpse into the vibe we’re hoping to achieve.