To review… the Grout Cottage is a Queen Anne built in 1895. It is a duplex that we began remodeling in December 2012. Here’s the introduction post to the house.

It’s high time we check in with the Grout Cottage project, there have been some Instagram snippets here and there but let’s talk about a few details. On a good day the Grout Cottage still looks a little like a haunted house but that’s because the exterior transformation hasn’t really happened yet. Earlier this week a young couple drove by and stopped to look at the house. I chatted with them and they said they liked to stop by periodically to see the change happen. They asked me if we were going to paint the exterior and of course I said yes…what color do you think? I said maybe blue/grey, they agreed that would be a good one.

After that I joked with my Dad about the question of painting the outside. He said, no we’re not gonna paint, haven’t you seen the magazines, post-apocalypse is all the rage. We had a good banter back & forth.

Jokes aside let’s check it out,

The gable ends were changed to A-frame

For funsies I used a site called Colorjive to paint the house a blue/grey–not that I don’t think blue/grey is an entirely safe color but I’d like to get a visual. This is not the exact color it will be but it is a Benjamin Moore color but I can’t remember what it was now. 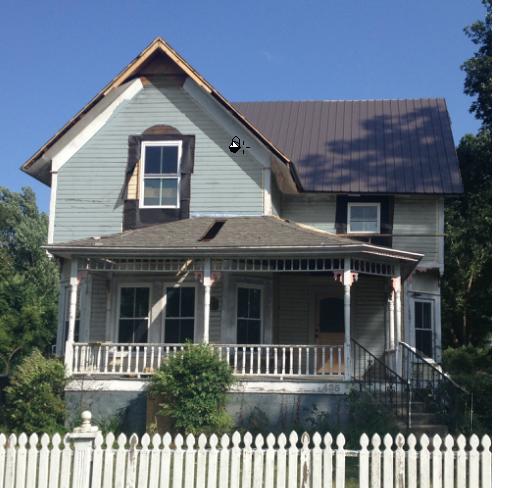 We rebuilt the upstairs porch entirely and raised the roof and the door to make enough room for a standard size entry door for the apartment. Also notice the gable end was changed to an A-frame on the back and you can see the other one on the right side of the house. There were four in all that had to be converted.

The light hits this house beautifully in the mornings that’s why I take so many pictures of the side and the blue sky. That rectangular window was added in the bathroom to provide natural light, there was no window there previously. The old and too small kitchen window is covered in black weatherproofing temporarily and the new kitchen window is right next to it. Notice the gas line running right in front of that window, that will be relocated. Those attic vents with the curved trim are darling, there is one on each side and they will stay exactly as they are.

Look now because pretty soon the new outside stairwell will be built and this shabby arbor will be gone and the patchwork stairs will be gone too. I will be #trulyrelieved when I don’t have to look at the crappy staircase any more.

Electrical lines and an HVAC line running up the right side of the house. We’ll build a box around these to parcel them together neatly

I spend a lot of time thinking about how I want to change some of the Queen Anne trim but stay consistent with the period. A lot of these trim pieces are rotten or have been re-created. I’m not wild about the “nipple” hanging off that bay. I’ve also thought about panels here around the window in this bay instead of just continuing the siding.

This is the newly sheet rocked Apartment B (upstairs). It’s exciting when walls go up and rooms form. We are looking at the living area in this photo. Originally we had exposed collar ties or “beams” but they were removed at the beginning of this week. We felt like the span wasn’t large enough and that the beams were detracting from the cathedral look.

So that’s a snapshot of wassup right now at the project. Currently I’m thinking about a built-in in the bathroom with glass doors,  a corner shelf at the entry and a whole boat-load of trim ideas for the front porch.Thanks for playing,

Written By
Sarah
More from Sarah
In the late 1800s, S.R. White platted 38 acres of what would...
Read More