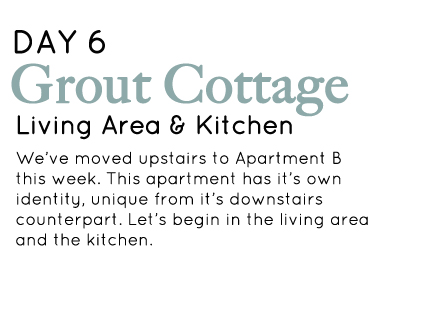 This was the only entrance to the upstairs dwelling, Apartment B. 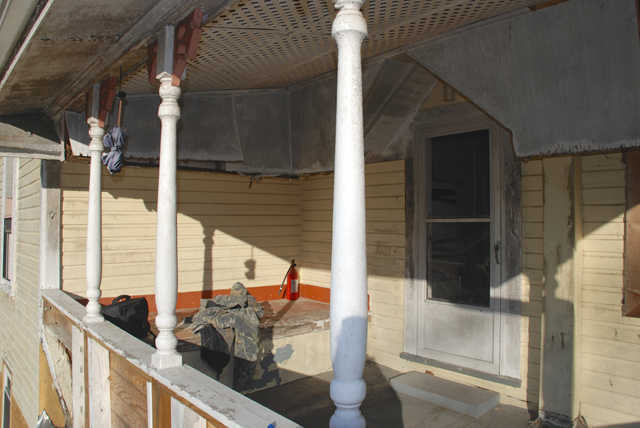 Scary exterior stairwell on the side of the house, 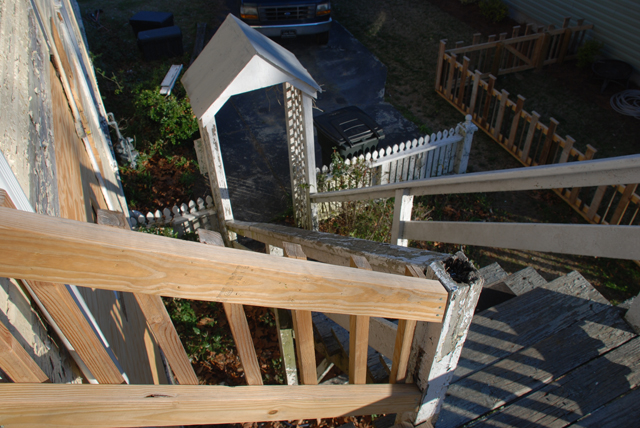 There was already an existing porch up there but the stairwell was literally sitting next to the porch, it wobbled when you stepped on to the landing and then if you made it up the stairs of death you were met with a small porch that could’ve fallen through on any given day. The entire porch and the stairs were completely torn off and rebuilt. 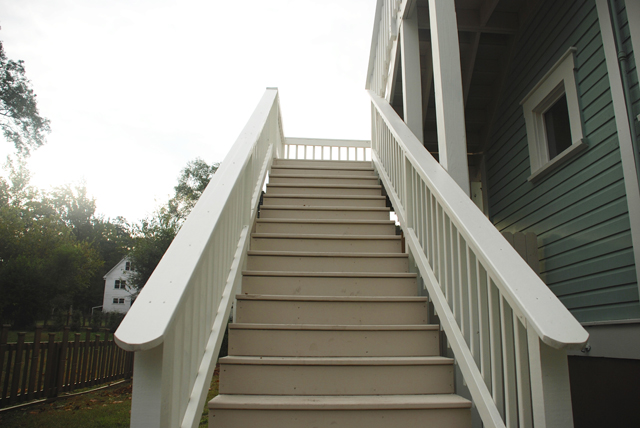 When looking at any of the before images of Apartment B, keep in mind someone was living here not long before the demolition began. 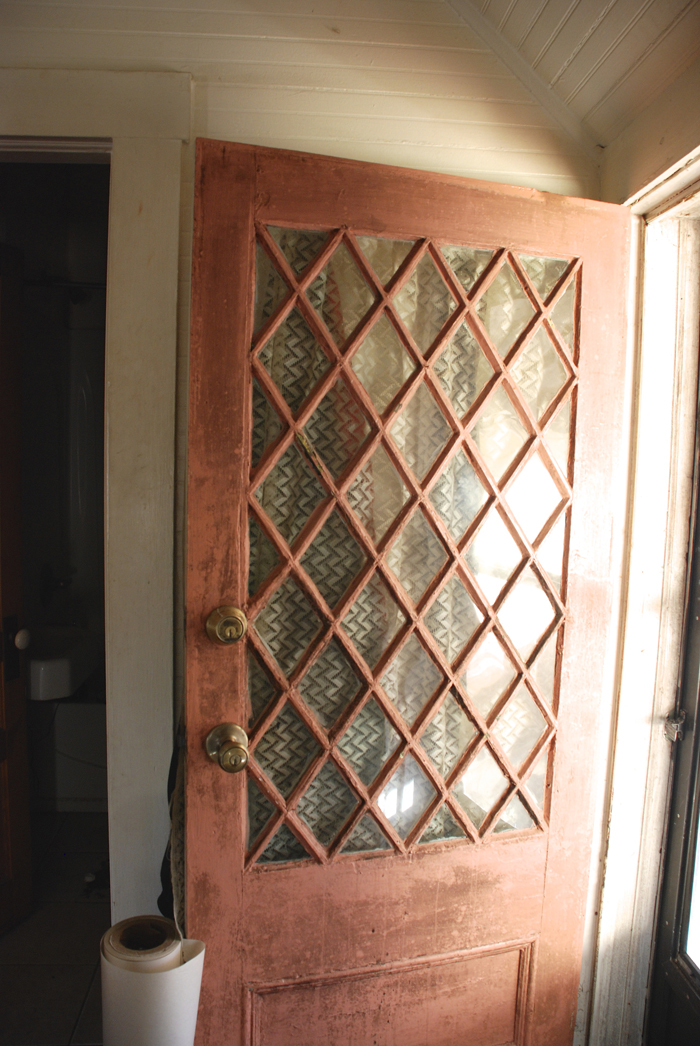 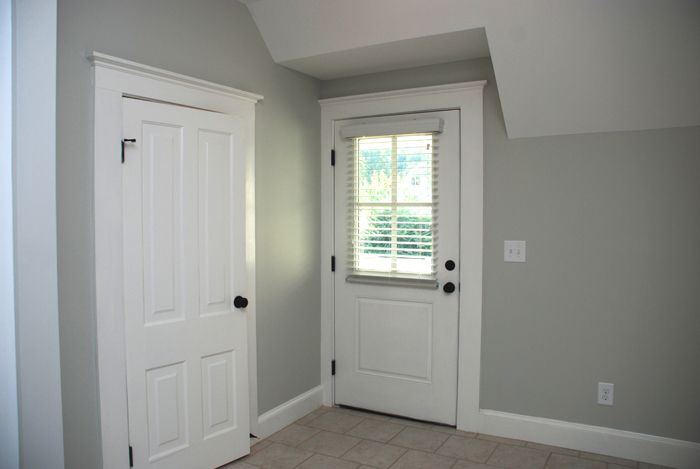 It was fun to re-configure the living area, kitchen and bath in this space. We had the bath in a couple of different spots initially but ultimately kept it in the same place but enlarged it. 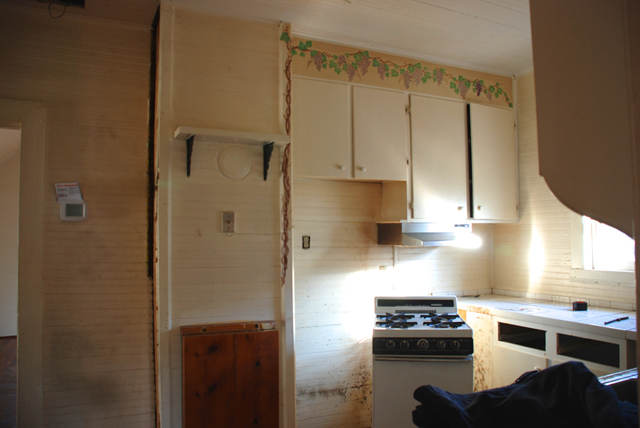 After the Indiana project was posted, some readers commented that they wanted to see the same before and after angles and of course you do. Whether it looks like it or not this is the same angle. 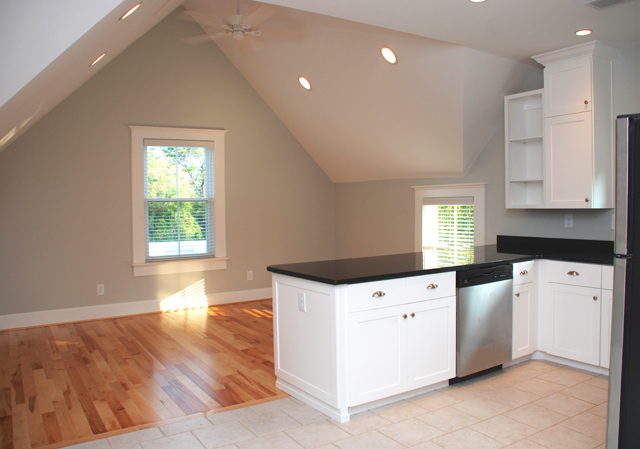 There are parts of the renovation process that some times have to be pretty fluid. When we framed up the cathedral ceiling in the living area, the plan was to install exposed, decorative collar ties–which are basically horizontal beams connecting the cathedral ceiling. They stayed up during the entire framing process and then before sheetrock installation we opted to remove them and enjoy the unobstructed view of our new cathedral ceiling. 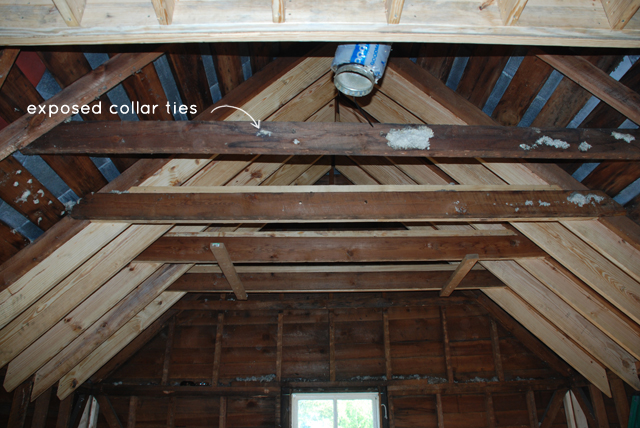 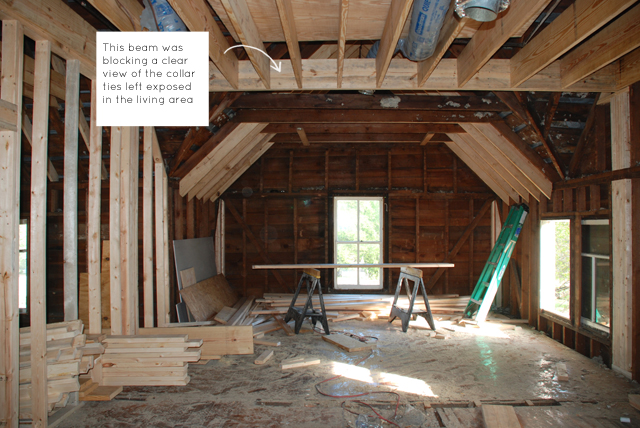 A shot during floor installation, 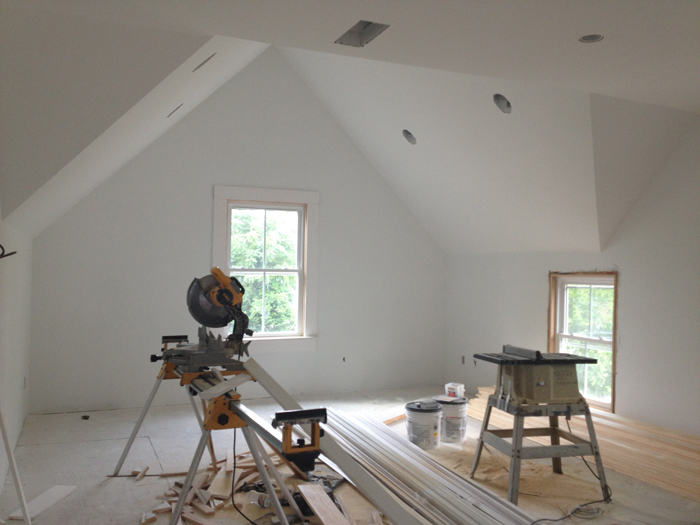 And after the walls were painted Benjamin Moore Moonshine, 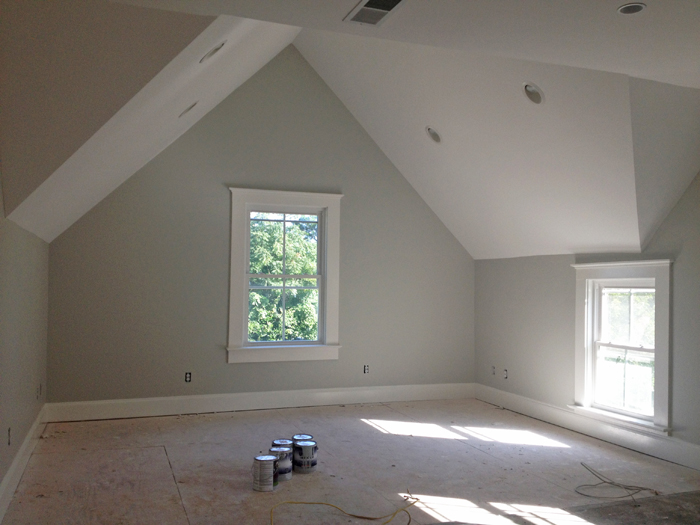 Apartment B is smaller than Apartment A but for this space the kitchen lives pretty large. I was skeptical about the actual space in the kitchen we planned for but it actually turned out great and a bit generous. The over-sized bar that separates the kitchen from the living area is a trade-off for the lack of space for a dining table. 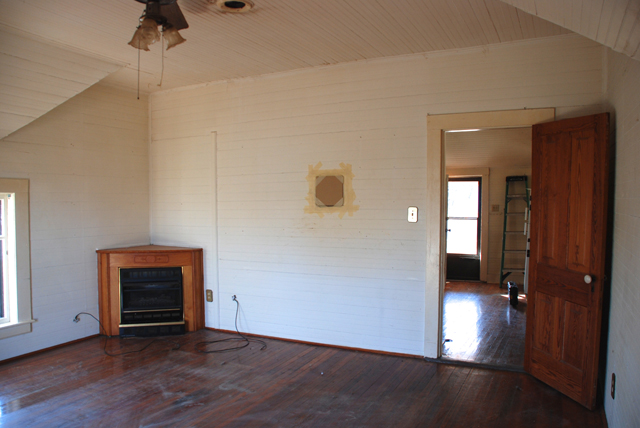 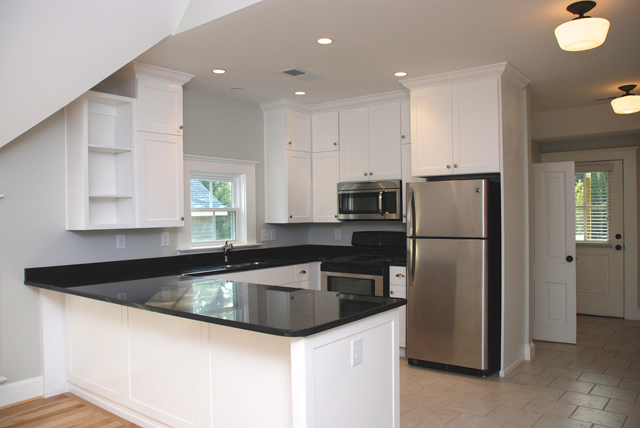 I tried hard here to maximize storage space in this kitchen and I think I accomplished that goal. Apartment B’s kitchen would give my kitchen a run for it’s money in the storage department (I have a small kitchen!) 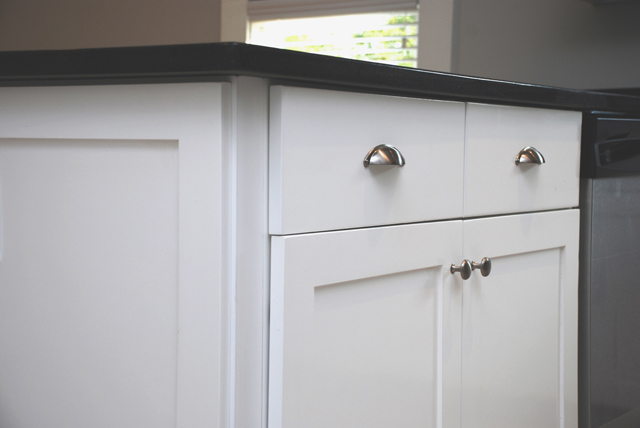 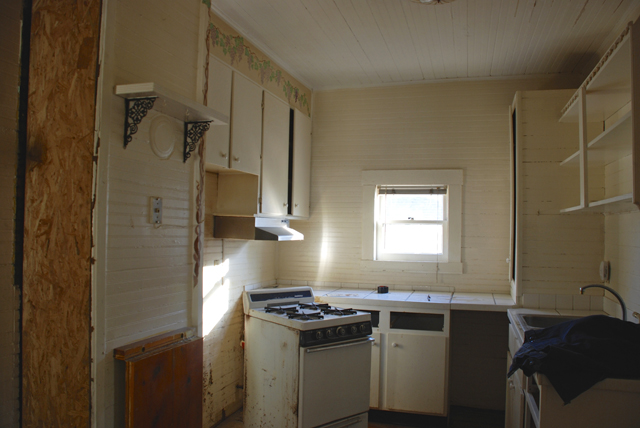 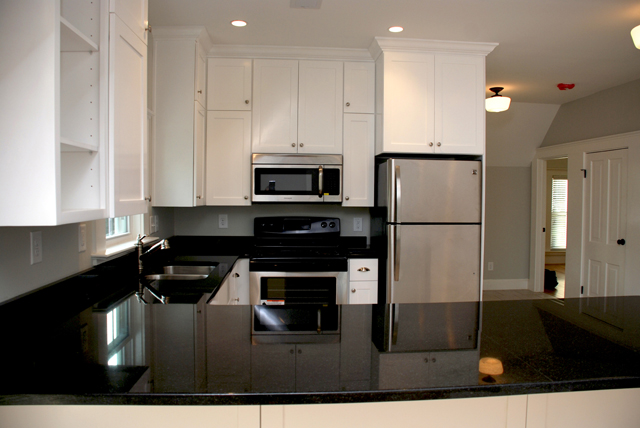 We even squeezed in a washer and dryer in this apartment! 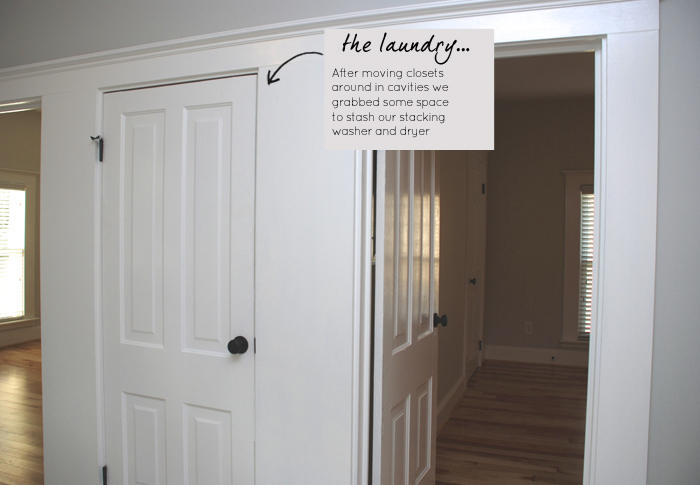 Come check out the custom bath cabinet tomorrow when we take a look at the bedrooms and the bathroom.

If you missed the beginning of the Grout Cottage reveal, go back to Day 1.Thanks for playing,

Written By
Sarah
More from Sarah
Gallery walls are on my mind a lot these days, they always...
Read More