A couple of Sundays ago I kidnapped Heffe post California Burrito at Tacos Por Favor and we fought the road warriors up the PCH to Will Rogers State Beach to take a look at an little piece of gypsy heaven via 16321 Pacific Coast Hwy — a tiny fantasy that seeded itself into my mind the night before as I stumbled upon a little Trulia gem.

Here is a look at the photos that grabbed my attention…

My whole notion that I was trying to hatch into a plan, was to buy this little trailer, use it to store the Vintage Shasta Camper during its exposed facelift (note the tall covered parking PLUS toolshed.) Then, we give it a full SEVEN WANDERS makeover, list that baby on AirBnB and let it pay for itself while we take our first plunge into marketing and servicing the world with a legitimate SoCal getaway. I wasn’t looking into logistics here, just exploring fantasy scenarios.

But – Dude WAS NOT INTO IT. I mean, hilariously in retrospect, he wouldn’t even get out of the car to come inside and look at it. I may never know the intricacies of all he didn’t like about the scenario — he kept muttering something about how close the units were to one another…. but I know better now. We are only going to get so far into the dynamic between luxury and simplicity with this endeavor, and a trailer park (even if it is by the ocean in the Pacific Palisades) might be taking it too far.

I thought it was a great idea and I was legitimately disappointed that he was quick to express his differences. However, I think we’ve both come to realize that the idea isn’t totally ridiculous, and with a few modifications, something similar might be the right answer to the problem of needing to find a spot to work on the camper long term!

Here’s a little taste of what the Trailer Park looked like from the car. 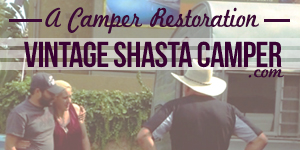 Written By
Betsy
More from Betsy
aaah the ghost chair, not sure how I feel about frontal nudity...
Read More