I was cruising through my internet friend Danielle’s Pinterest board that she shared with me a while back when she was renovating her kitchen.

When I say my internet friend Danielle, I mean a person whom I’ve never met in person that lives in another state and reached out to me because she reads this blog. We’ve exchanged some emails, opinions about design and other design bloggers, her kitchen remodel and her dining room design plan. Danielle has a love for design and she likes good stuff, the kind of stuff I like too, so we’re internet friends–would you agree Danielle?

So I was cruising through her Pinterest board and she must’ve been trolling some old Martha Stewart maybe because she had a couple of oldies but goodies in there and then I came across this image, 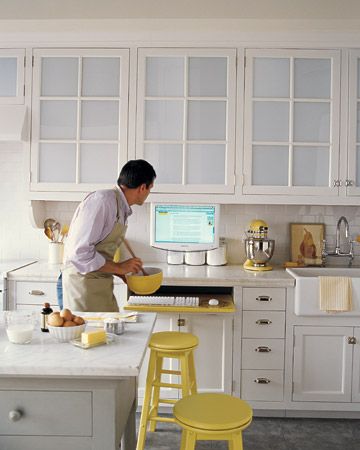 This kitchen was on the cover of Martha Stewart Living, maybe 2007. Doesn’t it just make you want to bake something like… now. It has elements that are still lovable 7 or 8 years later, like grey & yellow paired together, grey island paired with white cabinets, marble counters, bin pulls, bridge faucet and a subway tile backsplash.

I liked the kitchen well enough at the time but what I really fancied was that modern, perfectly scaled, white Samsung TV. We had just moved in to our first house and it was our first big renovation and I knew exactly where I could mount that little white TV. My parents gave us the TV for Christmas. We mounted it under the upper cabinet as pictured above and it was great. The TV moved with us and was used in the next two houses after that but now in our current house, the TV is sitting sad and alone in the attic.  But I’m hoarding it. 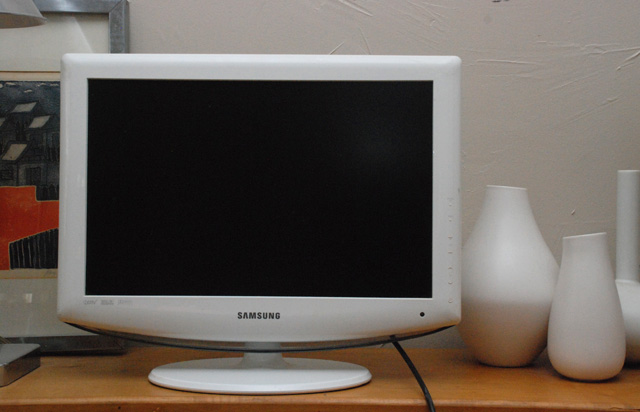 Even at 7 years old roughly, it still looks sharp. Recently, my husband Dan was trying to persuade me to get rid of it, after I went on a diatribe about getting rid of every single thing that we didn’t need—oh the hypocrisy.

And this image that my friend Danielle posted on her Pinterest board only justifies keeping the unused TV–I think.Thanks for playing,

Written By
Sarah
More from Sarah
My brother asked me to snap a few pictures at the Ocean...
Read More