As I explained in last Friday’s weekend post, my daughter DC is turning 3 this weekend. Before DC was even 2, we were invited to a slew of birthday parties complete with pony rides and bouncey houses.Â  But I figure Dan and I have a lot of birthday parties ahead of us and we’re going toÂ reserve those kinds of anticsÂ forÂ a later time–maybe whenÂ DC is in school. Right now we like to limit birthday parties to family and close friends.Â How do you feel about fancy parties full of toddlers and Cowboy Bill for entertainmentÂ before the age of 3? 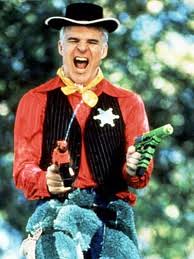 So a big part of this party happening this weekend is our gift to DC which is anÂ outdoorÂ wooden playset. We did some research before buying at places like Lowe’s, Home Depot, Costco, Sam’s Club, Sears and Creative Playthings.Â I talked with my Dad about the different types of material that the various sets were made of. He gave me a general hierarchy of durability which was,

Redwood drove the price up significantly and was outside of our budget so we looked at some cedar sets. My Dad warned that if the cedar isn’t high quality it will split. I read some reviews of some of the cedar sets offered at Costco and some parents reported that the cedar split when they were assembling it so we moved on. We found the best selection at Home Depot whereÂ they primarily carried theÂ Swing-n-Slide brand.Â To learn more about their construction we visited the Swing-n-Slide site.Â Â Â We liked the 4×4 construction and the heavy duty brackets used to assemble the sets. After tooling around their site a bitÂ we found their Outlet section. Swing-n-Slide was offering some discontinued sets at pretty great discounts so my husband and I settled on the Juneau. 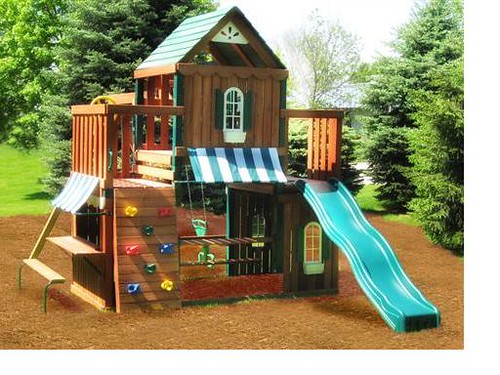 There was a lot of prep work involved before assembly could even begin. Over the years the previous owner hadÂ allowed vinesÂ and other brush toÂ take over the property. We’re lucky that my Dad owns a backhoe AND enjoys using as often as he possibly can soÂ he has completed a lot of the land clearing for us. I’m trying to talk him into buying a Bobcat which looks like this, 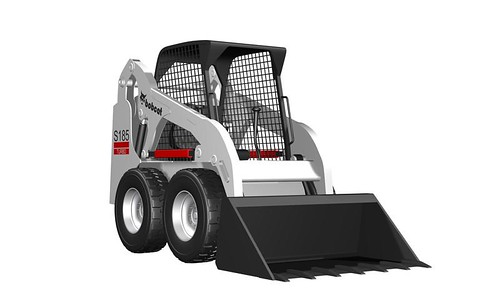 He is actually going to look at a used model today that has a mulching attachment on the front that just kind of eats small trees and brush piles.Â This is anÂ exciting prospect when you buy property that has been severly neglected and you battle brush piles with a rake.

So my Dad cleared some space in the side yard among the beautiful hemlocks and my brother loaded pile after pile of brush in to the rented dumpster. This processÂ went on for a few days.

Here’s a view of the property partially cleared, 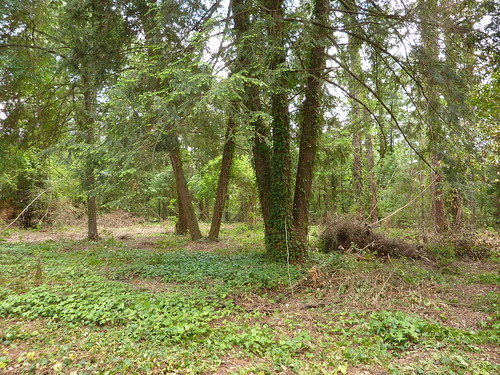 My brother and Dan then cut the old ivyÂ vines shooting out of the ground and hand raked the area where the playset would go, this would be significantly faster and easier if we had more equipment to smooth the area but we had to resort to hand labor. 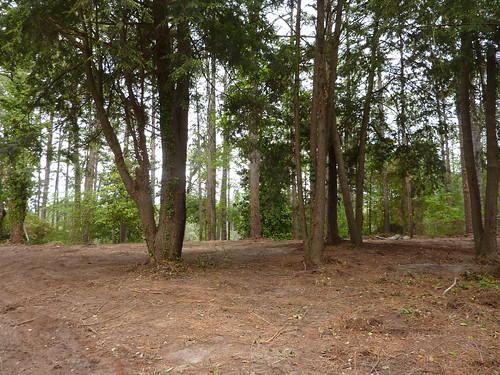 During the clearing process, my brother unearthed a stairwell made of square brownstones that leads down in to a lower part of the property. It will take a lot of work to fine tune this area but it was a cool landscape surprise. Those stones have been there a very long time, they were probably installed not long after the house was built in 1929. 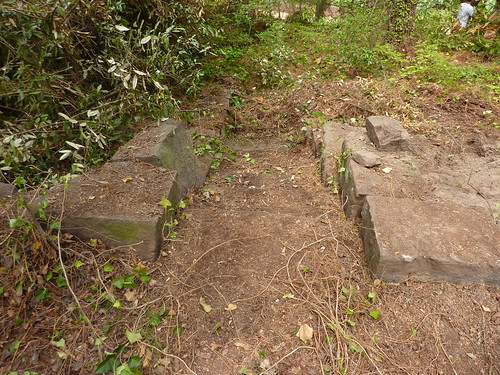 After all that clearing and raking, we distributed 80 bales of pine straw around the area. We chose pine straw because we live in the land of Longleaf Pines which shed their needles constantly so we took a “can’t beat ’em, join ’em” kind of approach. Others might choose some kind of engineered or recycled material like rubber mulch or sand.

And then finally– we’re ready for assembly whichÂ will beÂ leftÂ up to my Dad, brotherÂ and Dan. My Dad did carpentry work and a lot of woodworking in his youth and he’s a pretty fantastic handy man so he willÂ lead the assembly charge. The assembly is scheduled to begin this Friday, there’s a lot of speculation as to how long theÂ assembly will take, the estimates range from 4 to 8 hours.

I told everyone we could take a long break from yard work for a while, their response was basically yeah no s#[email protected] for playing,

Written By
Sarah
More from Sarah
So we’ve checked out the field of choices for the exterior wall...
Read More